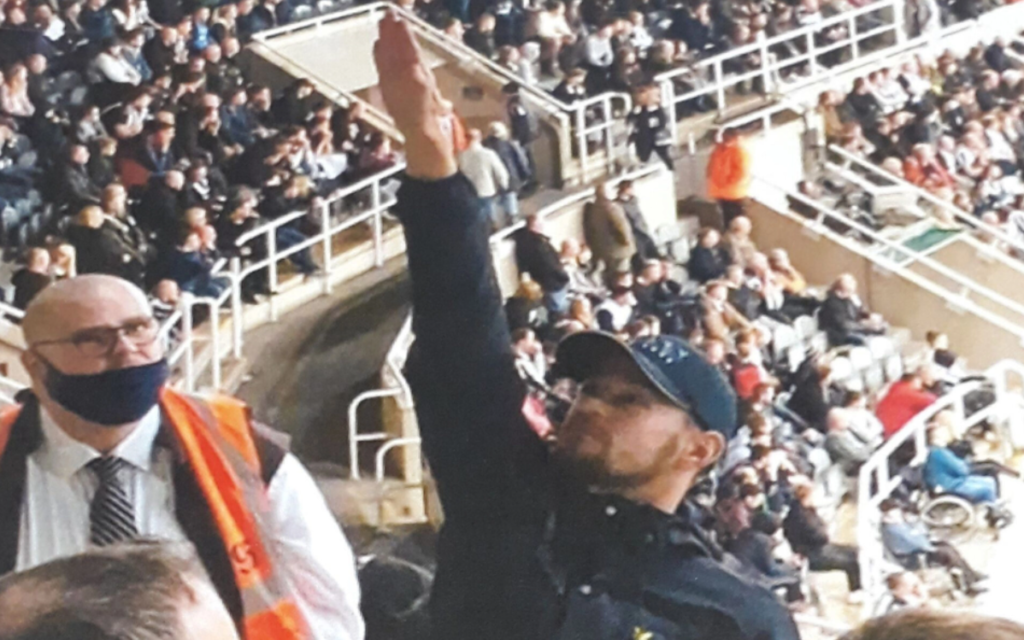 JTA — At first, 24-year-old Shay Asher claimed that a picture of him giving a Nazi salute at a soccer game in England last year was merely a misunderstanding.

Asher, a former fireman, told police who questioned him about the picture that he was merely waving to a friend during the match in Newcastle between Newcastle FC and the Tottenham Hot Spurs from London.

But police recommended prosecuting him all the same, and prosecutors presented evidence that forced him to admit this week in court to committing a racially aggravated offense that caused harassment.

He received a fine of nearly $400, Sky News on Wednesday reported, and police intend to ban him for a lengthy period from entering the main stadium of Newcastle in northern England. Pending that procedure, he is barred from entering any sporting event in Wales and England.

The punishment, which is unusually severe, demonstrates how British authorities and soccer officials are stepping up their enforcement against behaviors that used to be commonplace and went almost always unpunished merely a decade ago.

Tottenham is one of a few soccer teams in Europe considered by many of its fans and fans of rival teams to be “Jewish,” because of its historical fanbase. This phenomenon has led to the use of antisemitic language and trivialization of the Holocaust at games.

Asher, who lives in the Newcastle suburb of Gateshead — home to a large population of Orthodox Jews — reported to a local police station after the police shared an image of him online asking for details about a suspected hate crime.

The prosecution lined up a witness who said that she had seen him perform a Nazi salute with his finger over his mouth to make a mustache — a reference to Adolf Hitler — and heard him say he wanted to fight Tottenham fans, according to Sky News. Asher eventually changed his version, admitted to the offense and said he felt ashamed.

In 2021, the United Kingdom had more than 1,300 soccer bans in force — some for hate speech made online, the Express tabloid reported last year. UK Home Secretary Priti Patel last year announced that racist rhetoric online in the context of soccer matches may result in 10-year bans from stadiums.

“Racism is unacceptable and for too long football has been marred by this shameful prejudice,” she said.